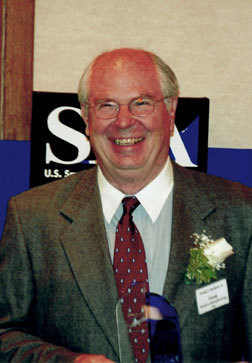 Mr. Beckerer has resided on the coast or inland waters for some part of every year and has enjoyed extensive use of a number of boats ranging from canoes, kayaks and cruising sailboats to center console fishing boats and a trawler.

Mr. Beckerer's community activities include, The Emergency Medical Technicians of Connecticut, serving as president from 1976 to 1977. He served as a Lieutenant of the Milford Volunteer Fire Department from 1973 to 1974. Frank also served as a C.P.R. Instructor for the American Heart Association. In 1997 100% of his employees took and passed the Connecticut Boating Safety and Personal Watercraft Operation course.

Frank's dedication to education lead him to co-found The Bridge Academy, an inner city Charter High School in Bridgeport, CT in 1997. He has been a director since the founding of the school.

Mr. Beckerer's commitment to safe boating led him to enroll the company as a member of the American Boat and Yacht Council ABYC  in 1978. The mission of ABYC is to develop rigorous industry standards in conjunction with the U.S.C.G. to improve boating safety and reduce injuries and fatalities. He spent 33 years on the Structures and Arrangements Project Technical Committee.

Mr. Beckerer has led the company's 50 year membership in the Accessory Manufacturers Division (AMD) of the National Marine Manufacturers Association (NMMA). For six years, Frank was a director of the AMD. He also served on multiple committees including two terms on the AMD Membership Review and Language Reclassification Committee, five years on the Marine Data Exchange (MDX) and E-Commerce Task Force and seven years on the education committee.

Mr. Beckerer's dedication to boating safety and environmental awareness has led him to memberships in multiple associations including The Society of Naval Architects and Marine Engineers, The Boating Writers International and the International Oceanographic Foundation.

2007 Official Citation from Michael Fedele, Lt Governor of the state of Connecticut for maintaining a successful company dedicated to providing superior thermoplastic products and services for over forty years.
2007 Jeffrey Butland Family-Owned Businessman of the Year Award presented by the U.S. Small Business Association (SBA) for Region 1 (New England). Mr. Beckerer was commended for significant contributions to the community and his commitment to education and job creation.

Mr. Beckerer co-designed, built and received a patent on a high speed rotary table saw for cutting extrusions into smaller pieces. He also was granted 12 other mechanical patents and five design patents on items including a self draining watertight boat window, self-sealing deck plate, safety cup holders and trailer hitch protectors. Many of these items have become the standard of the marine industry and have been copied world wide. In 1995 he was listed in the Who's Who for Inventors.